Hurricane Ian dumped trash on the beach. These guys picked up 310 pounds of it 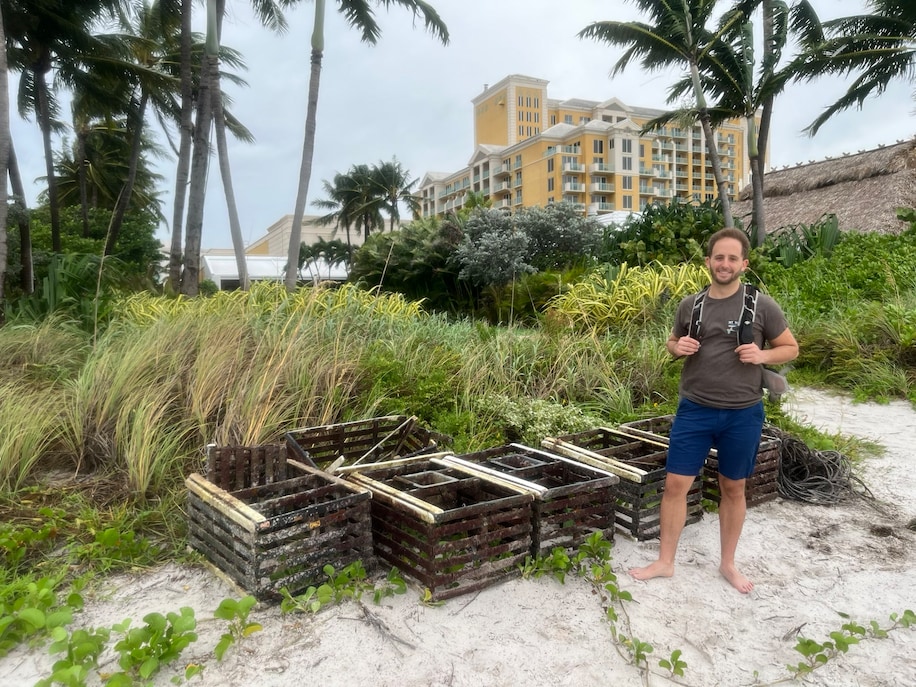 They removed derelict lobster traps, marine rope and other waste on Key Biscayne Beach that washed ashore from the severe winds

Manny Rionda said he has developed a habit he never imagined he’d have: picking up trash. He called it both addictive and life changing.
So when the Florida man saw waste piling up along the shore this week as Hurricane Ian sent tropical storm-force winds to Miami, he went straight to the beach. He brought with him fellow environmentalist Andrew Otazo.
They removed 310 pounds of derelict lobster traps, marine rope and other waste on Key Biscayne Beach that had washed up on the shore from the severe winds. “We call ourselves weirdos who pick up trash on the beach,” Rionda said. “It’s a badge of honor.”
The lobster traps can harm reefs and marine animals, Otazo said, and they can do more damage on the shore than in the ocean, as they also pose a risk to turtles and birds.
“They’re basically big wrecking balls,” Otazo said of the lobster traps. “They can do a tremendous amount of damage.”

He said the ocean floor has piles of large pieces of trash.
“There’s a repository that’s just accumulated over the years, and whenever we have a big storm, it gets pushed onto the land,” said Otazo, who is a long-distance swimmer and marathoner.
Using a radar app to track the hurricane bands, Otazo and Rionda waited for winds to temporarily dissipate before heading out to the beach Tuesday. Then they hauled in hundreds of pounds of washed-up waste, which they accomplished with the help of a stranger and his son, who eagerly joined the impromptu cleanup.
“It was all just one big mess,” Rionda said of the beach, adding that staples, nails and sharp spears of wood were sticking out of the lobster traps.
‘He is everyone’s boyfriend now’: Man saves cat as Ian’s floodwaters rise around him
Wearing reusable gloves, the men used serrated scissors and a shovel to sift through the waste and pile it up neatly on the side of the beach. They then contacted Key Biscayne Public Works to remove the dangerous debris they had collected.

“I’m not doing this just because I want to make a difference; I also want to bring attention to this problem,” said Otazo, who shared their trash haul on Twitter. He typically chronicles his cleanups on social media, with the aim of encouraging others to get involved.

Otazo started doing cleanups five years ago, when he noticed copious amounts of debris trapped beneath the exposed roots of red mangrove trees, which are native to Florida.
He began to research mangroves, and quickly learned about their critical role in protecting the region from erosion — particularly during extreme weather events, including hurricanes.
Otazo collects garbage strewn around shorelines and in the ocean itself, he said, but his specialty is foraging through mangrove forests, most of which are situated along the southern portion of the state.
Otazo, who was 13 when he first fell in love with mangrove trees, is on a mission to save them, one piece of trash at a time.

Over the past five years, Otazo, 35, has spent his weekends and evenings wrangling waste from barrier islands, including around Key Biscayne, where he lives, and other nearby waters.
So far, he has removed more than 22,000 pounds of trash from South Florida’s coastal ecosystem. He says he’s just getting started. Otazo completes his largest single-day haul of 1,050 pounds of garbage, in Calusa Park in Key Biscayne, Fla., in March. (Courtesy of Andrew Otazo)

The shoreside forests “are completely covered in trash; car batteries, electronics, everything you can imagine,” said Otazo, who works full time in public relations. “I started to methodically pick up, and I’ve been at it ever since.”

While he often does solo cleanups, he and Rionda also regularly work together.

Rionda, 55, is the founder of FillABag, a waste-removal nonprofit that has installed 57 plastic buckets for collecting trash on beaches in seven states across the country. The aim of his organization, he said, is to encourage people to turn “an ordinary walk into a meaningful cleanup.” Otazo, left, after he and Rionda were honored by the Village of Key Biscayne in August for their environmental efforts. (Courtesy of Andrew Otazo)

Like Otazo, Rionda is particularly passionate about protecting mangroves, and his nonprofit coordinates regular mangrove cleanups.

“Mangroves are a very magical species,” said Anne Birch, the Florida ocean and coast strategy director for the Nature Conservancy. “They provide a lot of what we call ‘ecosystem services’ for humans. They help stabilize coastlines, they reduce erosion, they harbor a diversity of species.”

Plus, she added, “they sequester carbon at a rate four times that of terrestrial forests,” which means they help combat climate change. When mangrove forests are damaged they release enormous amounts of carbon dioxide into the atmosphere, which has a grim effect on the planet.

They learned they were dating the same man. They dumped him, took a vacation together.

When it comes to easing the effects of natural disasters, mangroves have had a positive impact. Florida mangroves mitigated $1.5 billion in direct flood damage during Hurricane Irma in 2017 and shielded more than 500,000 people from the deadly storm, according to a 2019 report by the Nature Conservancy and several other organizations.

“Based on that data, you can see the power that nature can have in protecting our lives and our properties,” Birch said, adding that mangroves — which are found in parts of Asia, Africa and the Americas, as well as Australia and the islands of Oceania — are under threat, mostly due to dredging and pollution.

“If mangroves are reduced in size, then you are reducing the protection benefits that they provide,” Birch said.

The work of local activists such as Otazo and Rionda is important, she added. “When you start multiplying the power of one individual, you can make a real change.”

That’s Otazo’s goal. In his spare time, he hikes along the coast — trash bag in hand — plucking every piece of trash in sight. He’s found everything from virtual-reality headsets to a 250-pound block of industrial latex. He once picked up a body bag — fortunately without a body.

Otazo also attends numerous environmental events, and speaks regularly at schools and colleges about the importance of protecting the coastal ecosystem. He walked the Miami Marathon in 2019, hauling more than 30 pounds of trash on his back that he’d previously collected. Otazo participates in the Miami Marathon in 2019. He carried 30 pounds of trash on his back. (Courtesy of Andrew Otazo)

The purpose of his activism, he said, is to raise awareness and catch the attention of local politicians. He has advocated for installing trash traps that would block street litter from reaching the mangroves, as well as plastic bag bans.

“That’s a big reason we can’t get a handle on this problem,” Otazo said. “That’s why I go grass roots, so that we educate young people to make this a priority.” As natural disasters proliferate — which scientists say are fueled, at least in part, by climate change — Otazo believes his initiative is more important than ever.

His next coastal trash pickup is set for this weekend; he and a group of environmental enthusiasts including Rionda plan to remove trash from the mangroves of Bear Cut Preserve, on the shores of Biscayne Bay. He’ll do the same thing the following weekend — and every weekend thereafter.

“I’m committed to do this for the rest of my life, until I physically can’t do it anymore,” Otazo said. Otazo said he plans to continue his cleanups indefinitely. (Courtesy of Andrew Otazo)

Dear Community, We are grateful for your support a

This explains a lot. We didn’t film this, not s

I spy with my little eye…street litter. * 58 vo